Meaning "tyrant lizard", from Greek (tyrannos, "tyrant") and (sauros, "lizard") is a species of Theropod dinosaur. The species Tyrannosaurus rex (rex meaning "king" in Latin), commonly abbreviated to T. rex, is a fixture in pop culture. It lived throughout what is now western North America, with a much wider range than other Tyrannosaurids. Fossils are found in a variety of rock formations dating to the age of the upper Cretaceous Period , 67 to 65.5 million years ago. It was among the last non-avian dinosaurs to exist prior to the Cretaceous-Tertiary extinction event

If you have any questions whatsoever, please do not hesitate to email or call me anytime.. Thank you

The Carcharodontosaurus, or African T-Rex, lived during the mid-Cretaceous period between 112 and 93.5 million years ago. They could grow to be over 44 feet long and weigh over 9 tons! 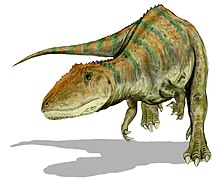 Spinosaurus meaning, "Spine Lizard," was a carnivorous theropod dinosaur that live during the Mid-Cretaceous period, "about 99 Million Years Ago." It was particularly noticed by it long spines which measured 5 1/2 feet tall.. This was considered to be the largest carnivorous dinosaur known to ever walked the earth at a staggering 59 feet long and weighing in at 23 tons. These teeth were found in Morrocco, North Africa.
Albertosaurus

Carcharodontosaurus is a carnivorous carcharodontosaurid dinosaur that walked our earth between 100 & 93 million years ago, during the mid-Cretaceous. It is currently known to include two gigantic species, which were among the largest known predatory dinosaurs, as large as dinosaurs of the era, Tyrannosaurus and Gigantosaurus, but not as large as Spinosaurus.

Deltadromeus (meaning "delta runner") is a large basal ceratosaurian theropod dinosaur from Northern Africa. It had long, unusually slender hind limbs for its size, suggesting that it was a swift runner. Two fossil specimens of a single species (D. agilis, or "agile delta runner") have been described, found in Morocco, North Africa, which date to the late Cretaceous Period, about 95 million years ago.

Triceratops is Greek for "three-horn face". This extinct dinosaur is a genus of herbivorous dinosaur that first appeared during the late, Cretaceous period about 68 (Mya) in what is now United States Of America. It is one of the last known non-avian dinosaur, and became extinct in the Cretaceous extinction event that occurred about 66 million years ago. Bearing a large bony frill and three horns on its massive four-legged body, with similarities with the modern-day Rhinoceros, Triceratops is one of the most recognizable of all the dinosaurs. It shared the landscape with and was preyed upon by the fearsome T-Rex.

Einiosaurus is a medium-sized herbivorous ceratopsian dinosaur from the Upper Cretaceous  of northwestern Montana. The name means 'buffalo lizard', in a combination of Blackfeet Indian eini and Latinized Ancient Greek sauros; the specific name (procurvicornis) means 'with a forward-curving horn' in Latin.

Camarasaurus meaning 'chambered lizard', referring to the hollow chambers in its vertebrea (Greek/kamara meaning 'vaulted chamber', or anything with an arched cover, and Latin/ sauros  meaning 'lizard') was a herbivorous Dinosaur. It was the most common of the giant saurapods to be found in the United States Of America. Its fossil remains have been found in Colorado and Utah, dating to the late Jurassic, between 155 and 145 million years ago.